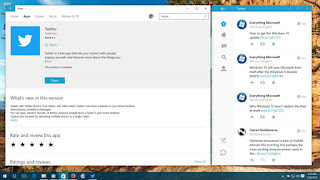 Being a Pc user its most likely that you would be following the Windows 10 news closely. Many new apps came into view. One that got the attention was Twitter’s exciting new app which by their makers got tailored specifically for the platform.

It’s here.
This Twitter app was launched alongside the launch of the latest Windows 10. The app sports easy and convenient access to top tweets, photos and videos…  without asking you get logged in.
Live Tiles are a unique addition in this Windows 10 app.
– Multiple photo tweets — upload up to four photos per Tweet
– Animated GIFs
– Vine playback
– Tweets with photos, Vine videos and other select content now show a preview in your home timeline
– Share photos privately in Direct Messages
Twitter’s desktop applications kept with its issue of being out of sync on different platforms, mainly because they’re all outsourced, we got the information.
It’s here.
0shares